How Tech Is Both A Blessing & A Curse

Home / Uncategorized / How Tech Is Both A Blessing & A Curse

“I ubered from the airport to my Airbnb. Later that night I met up with an old friend that I reconnected with through Instagram. We made reservations through Open Table and then spent the night running around the city playing Pokemon Go.”

If a friend said this to you ten years ago, you would wonder what language they were speaking. Uber, Airbnb, Instagram, OpenTable, and Pokemon are just a few ways that technology has disrupted our world in the past decade. While SkipTheDishes and Rover have made life very convenient, tech is both a blessing and a curse that has created some unwanted opportunities for fraud.

Here are some important considerations to keep in mind when travelling:

Online Reservations Can Be A Trick

Tina had planned a wonderful trip to Italy. As she stood at our wicket purchasing her Euros, she gushed about the wine tour that she had booked and the culinary class that she was looking forward to. She wanted an authentic experience and decided to book a rustic looking apartment through an online site. When she returned a few weeks later, she shared that she had lost 500 Euros for the apartment because it didn’t exist. As she stood in the alleyway, knocking on the door that never opened, she realized that it was a scam and ended up spending the day seeking out accommodations.

The danger caused by technology-related fraud is heightened when you’re travelling and far removed from your usual safety net. Immediate access to family, friends, your bank, and all of the other avenues that can help you in a tricky situation may be out of reach.

Be Wary of Reviews

We have started to rely heavily on reviews and ratings that can be found on Google and other forms of social media. Where we once trusted our friend’s advice about a new restaurant or a movie, we now lean heavily on TripAdvisor and Rotten Tomatoes. Bear in mind that these reviews can be fake and are sometimes auto-generated by bots.

A customer named Adam shared an equally distressing story at our wicket recently. He recounted the day that he was pick-pocketed while navigating the streets of Barcelona. As maps become a thing of the past, Adam was relying on Google maps to find his way around the city. As his phone shouted out directions, he dutifully followed the path into a crowded street and thought nothing of it when a man bumped into him and mumbled an apology. Blocks later, Adam realized that his wallet was no longer in his back pocket. He figured out that, while staring intently at the directions on his phone, the innocent-looking man he bumped into was stealing his wallet.

Don’t Leave Your Instincts At The Door

Technology has changed the way that we travel, eat, and are entertained. The bottom line is that tech is both a blessing and a curse. Our advice: Don’t toss out your instincts and good sense along with your paper maps.

For all your international currency needs, visit Currency Converters in Waterloo or contact us here. 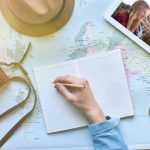 Top 5 Travel Destinations To Visit In 2020