Top 5 Travel Destinations To Visit In 2020

There’s nothing better than planning your next vacation in the middle of a cold Canadian winter.

If you’re a world traveller looking for your next bucket list destination or just looking to escape the winter blues, we’ve got the fix to cure your wanderlust. Read on for our top travel destinations to visit this year:

Costa Rica is on our list of top travel destinations, especially for the outdoor adventurer.

Growing in popularity for its “sustainable tourism”, Costa Rica’s draw could have something to do with its rugged rainforests, wildlife, beaches, and volcanoes. There’s a reason why Costa Ricans are some of the healthiest, longest-living people in the world.

Given the small size of this country — roughly 195 times smaller than Canada — you can do and see a lot in a short amount of time.

If you think of windmills and bicycles when you think of the Netherlands, you’re not wrong. Roughly half the country rides a bike on a daily basis and nearly every town and city is accessible by an efficient train system. If this beautiful country is on your bucket list, you must add the nation’s capital, Amsterdam, to your itinerary. This city is on our list for its scenic canals, abundance of cafes, and world-renowned art scene.

If you’ve ever seen a picture of Aruba, you probably don’t need much convincing to travel there. This destination is one of the Caribbean’s most beautiful gems. While Aruba’s white-sand beaches, friendly people, and low crime rates are major selling features for most travellers, the environmentally-conscious traveller will like the appeal of the country’s environmental practices. Aruba is joining a few other Caribbean countries that are working towards a ban on all single-use plastics and coral reef damaging sunscreens.

Morocco is any food lover’s paradise and with recently improved infrastructure, it’s now much easier to get around.

Camp out in the world’s largest desert and watch the stars, lounge on the beautiful white-sand beaches of the Mediterranean Sea, or haggle your way through a souk for souvenirs and make the most of your time in this wonderfully beautiful and colourful country.

Japan is set to host the 2020 Summer Olympic games, which is reason enough to visit Tokyo this year.

Known for being a very safe and clean country with an incredible mix of culture and history, Japan is a technological marvel that makes you feel as though you’ve stepped into the future.

We recommend hitting the streets of Tokyo to try traditional Japanese cuisine while taking in the sights and sounds of the booming metropolis. If you plan on visiting Japan this summer, book hotels and B&Bs early to avoid the pre-Olympic rush!.

No matter where you’re travelling to this year, Currency Converters is your one-stop-shop for all your foreign currency needs. If you need cash, wire transfers, or general rate information, we’re always happy to help! 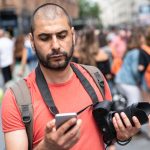 How Tech Is Both A Blessing & A Curse